1. In India, the concept of stand-alone daycare surgery centers is currently in its infancy.
It is estimated that by 2020, 75 per cent of all surgical operations will be carried out in ambulatory surgery centres

3. Investment required in the opening of a day-care surgery centre is considerably low as compared to secondary or tertiary hospitals

4. EBITDA margins for daycare centres range between 25 to 30 per cent with a payback of ~3-4 years. An average corporate hospital, on the other hand, takes a minimum of 18 months in the making and a minimum of five to seven years to break even

5. As per the industry experts, even in a hospital setup around 75 per cent of revenue is finally made from the surgeries. This fact further supports the growth of daycare

2. Advantages of single-speciality hospitals include cost efficiency due to higher volumes, quality care due to greater specialization, economies of scale & scope and ease of operation & maintenance

3. Typical EBITDA margins range from 30 to 34 per cent although some specialities have higher margins. Pay-back period is estimated at 2-3 years which may vary with the specialty

1. Faced with liquidity issues, players have been exploring models such as management contracts and public-private partnerships 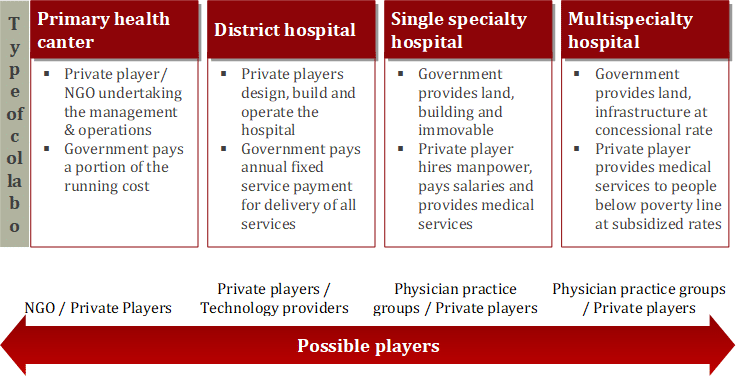 The critical success factors for PPP are

4. Risk apportionment through careful design of the contract

5. Examples of successful PPP projects are:

1. Major corporate hospitals are making significant investment in this direction

3. The concept of medi-city is based on models already operating abroad

4. Success of a medi-city would depend on its location and ability of the hospital
to drive-in patient volumes 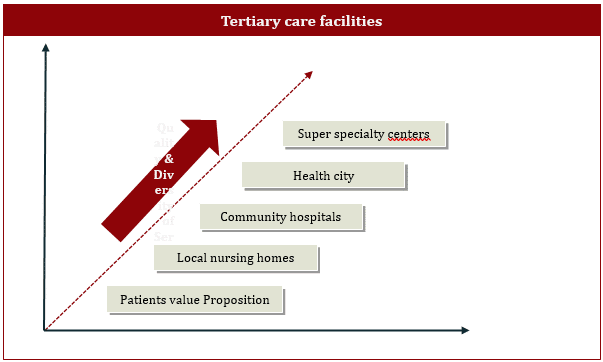 1. Another likely healthcare delivery model to emerge in the future is a low cost, no-frills hospital for the middle-middle and lower -middle classes. These would be functionally focused hospitals with a conscious effort at cutting extraneous costs – along the lines of the ‘Nano’ car or a ‘Ginger’ hotel model

2. These hospitals could be based in Tier II and III cities and towns where the cost of resources is lower and would provide primary to high end secondary care services

3. Low cost hospitals planned in Mysore, Siliguri and Bhubaneshwar – These hospitals are the brainchild of Dr Devi Shetty of Narayana Hrudayalaya. The hospital has planned to be built at a low capital cost with the land being provided at subsidised rates by the state government. The construction is expected to be such that the general wards would be built using pre-fabricated material. There would be desired amount of daylight and no air-conditioning. Only the OTs would have conventional concrete structures. In this chain of hospitals heart surgeries would be conducted for INR 50,000 which is almost 1/3rd to 1/4th of the costs in a large tertiary care hospital

4. Apollo Reach Hospitals – Apollo Hospitals which runs a chain of close to 50 hospitals in major cities is planning to set up 250 low cost ‘Reach’ hospitals in Tier II and III cities. The first has already been set up at Karimnagar and others are being planned in cities such as Nellore, Karaikudi, Nashik and Bhubaneshwar. The rates of treatment in such hospitals would be 20 per cent lower than what is charged in cities

1. In a vast country like India with its population being distributed across distant geographical locations, providing basic healthcare to all is a key challenge.

2. Telemedicine is fast-emerging in India, supported by the ICT sector. A number of corporate hospitals such as Apollo Hospitals, Fortis Hospitals, Narayana Hrudayalaya, Tata Memorial Hospital and Shankara Nethralaya have introduced telemedicine initiatives