The story of Indian e-tailing, and how it is expected to evolve

Buy Full Report The Gold Rush of the new age   The idea of waging a war to capture market share in a booming economy like India is not new to companies. After the liberalisation of the economy in the mid-90s, many companies took big bets on Indian markets; a lot of them gave away … more

The Gold Rush of the new age

The idea of waging a war to capture market share in a booming economy like India is not new to companies. After the liberalisation of the economy in the mid-90s, many companies took big bets on Indian markets; a lot of them gave away profit margins for the short term in pursuit of market leadership and later leveraged their dominant positions to create a strong P&L for themselves.

Needless to say, the same story is playing out in the world's 3rd largest economy (in PPP terms) as well. In the Indian consumer internet market, an additional anxiety amongst the aforementioned stakeholders is created by the fact that the key performance metrics are more skewed than for the global peers.

It's the economy stupid

The ideas largely generated in the Silicon Valley, and successfully tested in China are being pursued in India, a classic case of This-of-that strategy which most of the funds and e-commerce companies have followed globally. A lot of debate is going on related to the valuations and the future of some of the leading e-tailers of India. Some quarters are going as far as to say that the doomsday for the Indian e-commerce industry is close – at least for some players.

It's a good time to do some stock-taking of the Indian e-tailing industry, and understand the shape it is expected to take. The key point here is that the focus should not be on valuations and the debate around it; E-tailing valuations, like that of any listed company on the stock market, are also sentiment driven and propelled by the short to mid-term considerations. In the last one year, except for Amazon (riding on AWS performance), most of the e-tailers have lost some bit of market valuation. (TYO: Rakutan, EBay, BABA: Alibaba, JD: JD.com, AMZN: Amazon.com)

The question worth deliberating is what is the realistic e-tailing opportunity for India and how it will shape up. A lot has been said and written around this. Let's look at the way we define and assess the potential of the e-tailing market in India. It essentially rides on the following pillars:

1. Total consumer spending in India, further dissected by the product categories (e.g, Mobiles, electronics, fashion etc.) and the type of cities where these spends are happening

2, What % of each of these categories can go online – a good estimate is to trace the US and Chinese markets story at the similar macro-economic point of time  The macro-economic prospects of India in next 3-5 years

4. And the current speed of growth of e-tailing in the some of the more mature markets

Keeping valuations apart, India presents a bullish picture for the online market as it is pegged neutral to positive for all the above listed parameters. According to RedSeer estimates, the market would be between USD 100 to 120 billion by 2020, only the third largest after the US and Chinese market. The growth posted by Indian e-tailing Industry in last one year is 130%+ (q-o-q for Q4 for each year) and since CY2012, the CAGR has been close to 100%, which is a 5-6X multiple of any developed market, on the largest base of any developing market. Growing at this pace, the Indian e-tailing market will become ~15-20% of the US market size in next 5 years from current ~4-5%, which is a large opportunity by any standards and the key reason the Chinese, US and now Japanese players are so aggressive on India.

The Troy of Indian e-tailing 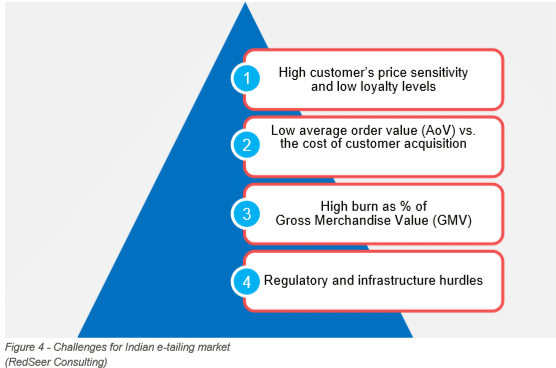 The serious challenges are between the points 1, 2 and 3. Point 4 is something which all businesses in India have come to terms with and the concept of the great India jugaad works around the same.

Price sensitivity, and the resulting low customer loyalty is the other major issue faced by e-tailers in the Indian market. Last year, when one of the biggest e-tailers reduced/rationalised the prices on its portal in its quest of profitability, it didn't expect that within 2 quarters, its GMV will drop down by almost 50% (in a market which has grown ~120% on a YoY basis). A similar story has also played out with a leading fashion e-tailer in India, which saw a 30-40+% m-o-m drop in GMV once heavy discounting was curtailed with the aim of reducing cash burn. Thus, the test of price sensitivity and brand loyalty has failed the Indian e-com market repeatedly, putting major roadblocks in the Indian etailer's journey to achieving the holy grail of both GMV growth and profitability.