Furthermore, as consumers are spending significant time on laptops, smartphones, tablets and smart-tvs, UAE and KSA have also witnessed significant increase in the number of screens to which a person gets exposed. Increasing internet penetration and screen exposure are the key drivers for the increasing time spent using the internet.

One of the key beneficiaries of increased time spent on the internet are Over-the-Top (OTT) platforms. Popular OTT platforms offering their services in the MENA region are Netflix, Amazon Prime Video, YouTube, Hotstar, Starz Play, Shahid.net, among others.

One of the key trends that emerged during interactions with digitally active consumers was that of snacking while streaming. We expect online streaming platforms to be a driver for online food delivery platforms in the region which currently stands at ~ $2 Bn+ in UAE and KSA. 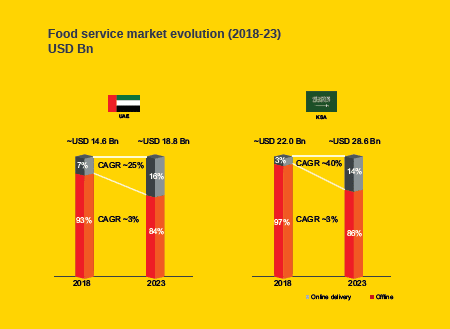