INTRODUCTION   An aggressive budget by Saudi Arabia to lessen dependency on oil The Kingdom of Saudi Arabia is on a spending spree to decrease their dependence on oil. It is evident as the Kingdom is ready to spend 978 billion riyals ($261 billion) to expand its economy away from Oil as part of Crown Prince … more

An aggressive budget by Saudi Arabia to lessen dependency on oil

The Kingdom of Saudi Arabia is on a spending spree to decrease their dependence on oil. It is evident as the Kingdom is ready to spend 978 billion riyals ($261 billion) to expand its economy away from Oil as part of Crown Prince Mohammed Bin Salman’s audacious reform agenda. One of the focus area in the budget is the explicit focus on structural reforms and enhancement of non-oil revenues. The GDP fell by 3.7 % in the first quarter of 2017 as compared to 2016 and further shrank by 2.3 % in the second quarter of 2017. The latest budget is aimed at reviving the economy with increased spending to enhance the non-oil revenues.  The Saudi government is optimistic, estimating growth to rebound to 2.7 % in 2018. The unemployment rate in Saudi is at 12.8% and the broader plan of Vision 2030 is to make Saudi Arabia less dependent on oil, reduce subsidies and increase employment and hence redesigning the economy is an indispensable component of Vision 2030.

The introduction of value added tax along with new excise taxes on tobacco, soft drinks and recent levies on expatriates are expected to increase the non-oil revenues. Riyadh has forecasted an increase in non-oil revenues to 291 billion riyals in present year from 256 billion riyals in 2017. The initial public offering of the national oil giant Aramco, with an estimated valuation of USD 1 trillion, is one of the important feature of KSA’s economic strategy.

HOW THE RECENT BUDGET DIFFERS FROM THE PREVIOUS ONE 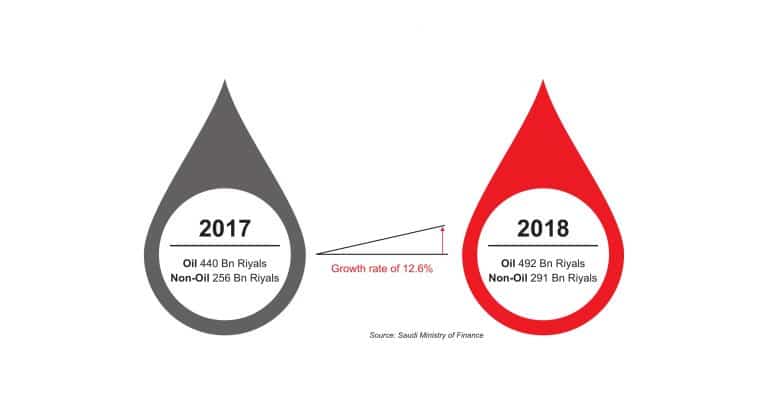 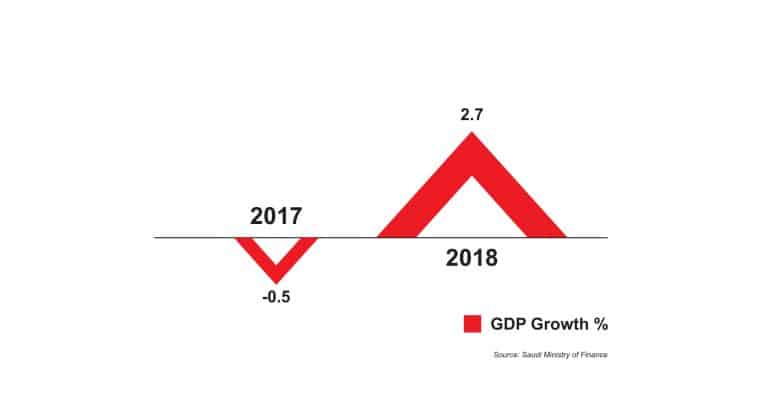 The public debt has grown from 17% of GDP to 21% of GDP. Approximately 50% of the latest budget is to be funded from oil revenues, 30% from non-oil revenues, 12% from debts and the remaining 8% from government balances 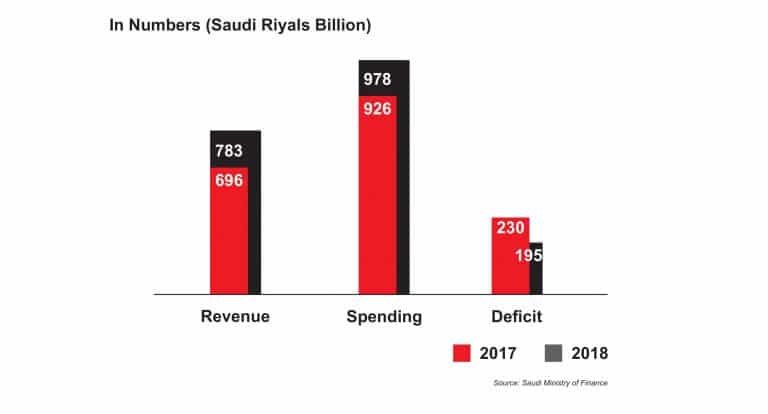 Since the government spending is estimated at 978 billion riyals, the deficit will slow in 2018. The government deficit in 2018 is estimated at 195 billion riyals against 230 billion riyals in 2017. Saudi Arabia first published a five-year economic development plan in 1970 and began to take a strategic approach to its budgets. In that approach, defense, public utilities, education and transportation were the sectors which received the highest funding. The money spent on infrastructure is being increased by 86% and the amount devoted to municipal services is also being increased. 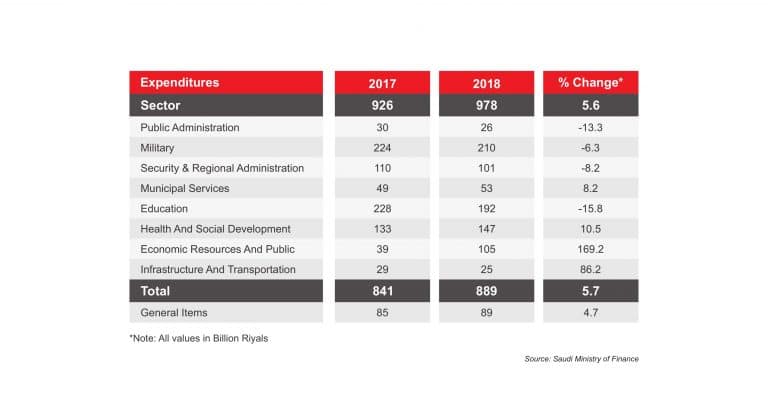 The Saudi government keeps on reviewing its spending as a fundamental extension to keep the economy moving and stimulate growth until the point when it can lean more on the private sector. While the budget expansion might be costly today, the state sees it as a coherent interest in building up the non-oil divisions of its economy with an eye toward culling the budget deficit by 2023. The spending strategy depends on the assumption that oil costs will stay sufficiently stable through 2018 to empower the government to pipe oil and non-oil income into developing sectors, for example, manufacturing, mining, tourism, financial services and technology

– Gain for the private industry

KSA is to spend SR 72 billion (USD 19.2 billion) for the private sector of the economy. This spending is again in line with stimulating non-oil revenues

Saudi’s private sector is heavily dependent on government spending for its economic activity. Hence the government is planning around USD 200 billion worth of state sell offs which makes it one of the biggest privatization plans in history. In addition to this, a planned USD 100 billion IPO of shares in the national oil giant Aramco is also in view. This stimulation of the private sector is aimed: 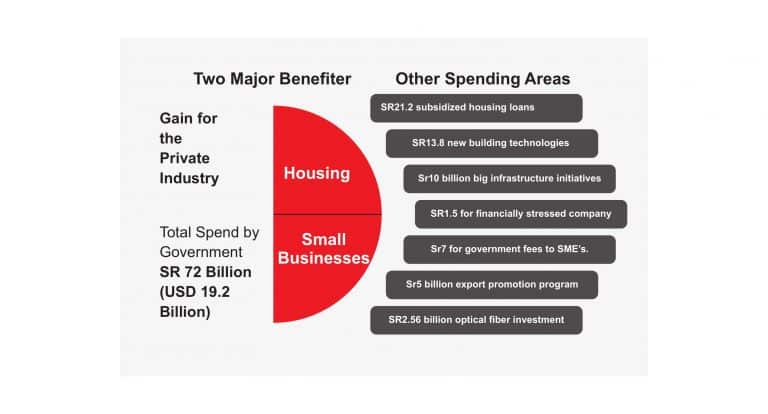 Petrochemicals account for almost 66% of the KSA’s non-oil exports and Saudi is already successful in this sector in the global market. Four of the twenty largest ethylene complexes in the world are in Saudi Arabia and SABIC (Saudi Basic Industries Corporation), which is the biggest company in the middle east, is one of the topmost chemical companies across the globe. These certify Saudi’s success in the petrochemical market. Saudi Arabia led the GCC in petrochemical growth expanding by close to 6% in 2016. The kingdom believes that an efficient capitalization in innovation can really improve the kingdoms positioning in the petrochemical market and would be helpful in increasing the employment rate. This growth would be helpful with respect to the private sector as an increase in employability would help in the growth of the private industry as well.

The kingdom is heavily focussing on the infrastructure sector as is evident from ~86% increase in expenditure on infrastructure in the recent budget as compared to the previous budget. This calls for an opportunity for investments in the construction sector which is estimated to form ~6% of the GDP of Saudi Arabia by 2021. SR54 billion is allocated for infrastructure and transportation. This also includes the budget for initiatives with a total cost of SR21 billion to develop roads, ports, railways, airports, housing, communications and information technology, postal services, the industrial cities of Jubail and Yanbu, Ras Al Khair Industrial Mining, and Jazan City, for primary and downstream Industries. Further within the category, the biggest increase in budget allocation is in economic resources category. Projects such as water supply schemes, dams and sewerage etc come under this category. For improvement in the construction industry.

KSA is a large marketplace for goods manufactured in the factory which includes some automobiles, electrical and mechanical equipment. However, the present requirements by the kingdom are met through imports from other countries. By leveraging the strong natural endowments along with a large market size, the kingdom has an opportunity to meet a greater share of its national demand. There is visible increase in the local production by some private companies like Isuzu which opened a truck assembly plant in the kingdom

There are ample deposits of metals and non-metallic minerals on the western sideways of the Arabian Peninsula. Some of these minerals include gold, zinc, bauxite, gypsum and limestone. The mining and metals sector is largely undersized currently and the cumulative combined GDP of these resources is estimated to be less than 3% of KSA’s GDP. There is a chance for the growth of both manufacturing sector and supplementary resource sector if the kingdom spends more in exploration and makes a framework which allows both public and private sector organizations to succeed.

The primary beneficiary of the increased public spending is the healthcare sector which saw a large-scale build-up of infrastructure related to healthcare which comprised of 81 new hospitals. The number of Saudis above the age of 65 are expected to increase by 2030 and hence the health care sector needs good amount of spending. The private sector is to gain from this as the current suboptimal productivity and financing of the citizens can be covered by them. The lack of a healthcare personnel who are not structured to handle the rising cases of non-communicable diseases like diabetes and a growing need for doctors, nurses and other skilled professionals are the challenges faced by the people and hence these are the opportunities in this sector which can be tapped. There is not enough replacement for professionals who retire or leave

The retail sector has great chances to flourish as online retail is on the rise. There is a possibility of hiring almost 0.8 million people in this sector over the next few years. The annual growth for retail has been at 12% over the previous decade and the rise in household incomes has been the major reason for the high growth rate. This is the major area where the Saudi women have found occupation. Their number increased to 10 times in 4 years. This indicates a push towards Saudization and feminization by the government of the retail classes catering to women. Some good measures that can be taken are: acceptance of best practices in retailing, supply-chain effectiveness and adapting modern retail formats. These measures could considerably enhance output and development.

The major value addition to the economy of the kingdom and the growth of public and private sectors can be done through the financial services sector. The SMEs have huge potential for growth and there could be improvement in the provisions of financial services to the households including loans and security products. Households can help the finance sector by catering to Kingdom’s big investment needs indirectly through their savings.

Saudi Arabia interests 10 million to 13 million Muslim visitors to the sacred sites of Mecca and Medina every year, counting more than two million during the annual Hajj excursion period. But in the broader picture, the tourism industry is weakening which can be seen by a drop of 31% in the number of visitors between 2004 and 2012. A tiring visa procedure adds to the frustration and further discourages many international visitors. Hence this sector has a good potential to grow and can improve a thriving private sector leisure tourism industry for locals and foreigners alike. Saudi has a wealth of archaeological treasures, areas of natural exquisiteness and a long Red Sea coastline. These things can be leveraged, and a budding leisure tourism industry could be built.

– Exploring the way ahead

Saudi Arabia has declared a SR 978 billion spending plan for 2018, depicting it as the biggest spending plan in its history. Perhaps the most noteworthy contribution to the latest budget was its adoption of an advanced method of financial engineering to expand the tools in the hands of the government in an unprecedented manner. The financial plan, which in the past has been 90% oil income, in this year is not more than 50 % from oil revenues. The rest is 30 % from non-oil incomes, 12 % from public debt and 8 % from government funds.

An imperative and extremely striking point is that even though the budget for 2018 is SR 978 billion, it forms just 88 percent of the total expenditure. This indicates two imperative insights.

1. There is an additional investment expenditure of SR133 billion – SR 83 billion from the Public Investment Fund and SR 50 billion from national development funds

This noteworthy spending comes at an oil cost of $60 per barrel, while the most astounding spending plan in the historical backdrop of the Kingdom before this year was the point at which the cost of oil was $120 per barrel.

The government has concluded that investment funds will be the primary instrument of the Saudi economy. KSA has set two key strategical objectives in the fiscal balance program on which the budget is based. The first objective is that the general reserve should not fall below SR 200 billion and the ratio of public debt to GDP should not exceed 30 %. The increase in expenditure exceeded 13 % and non-oil revenues increased by a remarkable amount to SR 256 billion.

NEOM along with Nine other programs are planned to be launched in 2018 to spur growth. The two major challenges that are facing the Saudi Economy are unemployment rate and inflation. These challenges may be met to some extent by Aramco’s IPO and funds generated from the war on corruption.

The 2018 budget includes unparalleled expert methodology, preparation and strategy. The state has chosen to come back to be the essential monetary instrument and to keep up capital spending that is deserving of the yearning and critical Vision 2030.