INTRODUCTION   – Evolution of Lighting Systems The global lighting industry has seen a huge evolution right from incandescent to the light emitting diodes (LED). Earlier, end-users had very less options to choose from and fixtures were the only differentiators. Along with the evolution came lot of technologies for users to pick. HIDs were the … more

The global lighting industry has seen a huge evolution right from incandescent to the light emitting diodes (LED). Earlier, end-users had very less options to choose from and fixtures were the only differentiators. Along with the evolution came lot of technologies for users to pick. HIDs were the ones which hit the market and later giving way to other technologies, FTLs, CFLs, and now LEDs. LEDs are becoming the go-to option in a world where energy and resources are becoming scarcer and more expensive. 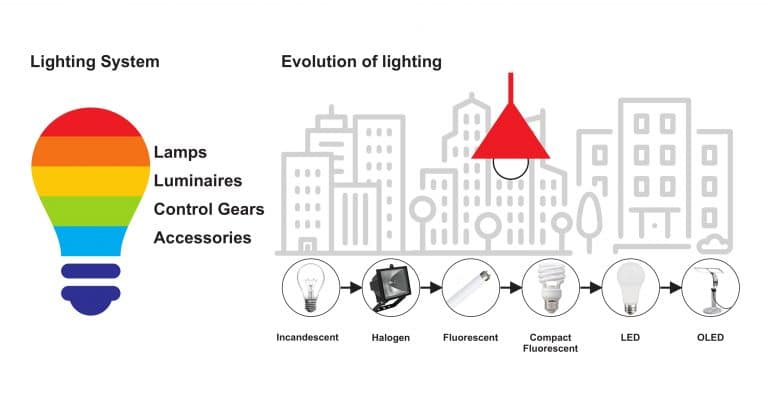 The Global lighting system market is at a mature phase, as developed markets like the USA and Europe contribute to majority of the demand. The Global lighting system market is estimated at approximately USD 95 Billion in 2017 and has been growing at a CAGR of 5 to 6 percent over the last 5 years. Unlike most mature markets, Lighting Systems is expected to continue growing at a decent rate 5 to 6 percent of over the next 10 years and anticipated to touch USD 140 Billion by 2025. Developing and high growth markets like Asia and Middle East are expected to strengthen its global position in the next 8 to 10 years. 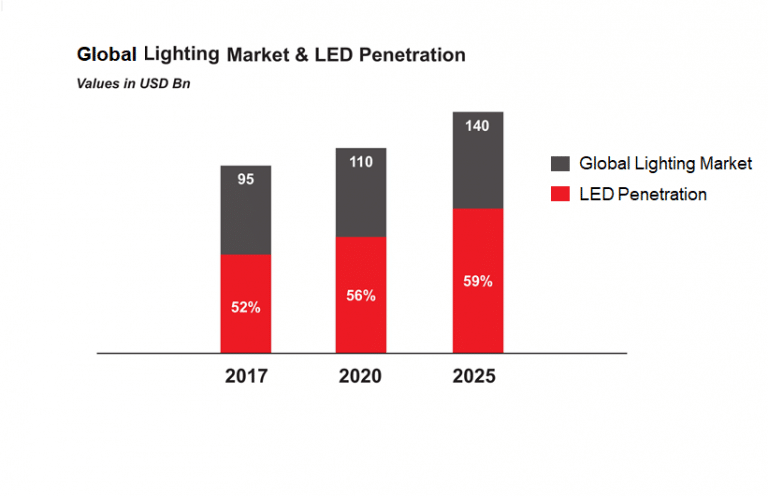 Over the last few years, there has been huge Infrastructure investments in the Middle East due to rising population and the upcoming mega events, which led to a constant and continuous demand for lighting systems. The Gulf Co-operation Council (GCC) construction sector was valued at USD 120 Bn and the overall lighting systems market was estimated at USD 2.7 billion in 2017. The lighting market is expected to grow at 6-7 percent CAGR for the next 8 years. Much of the growth is driven by strong demand from Commercial, Residential, Industrial and Architectural lighting. 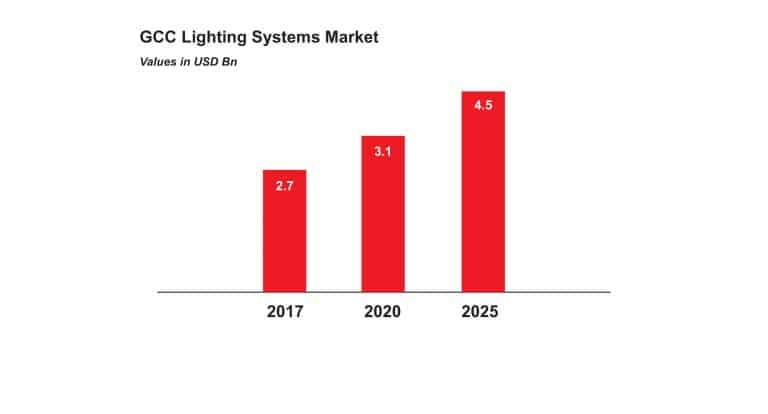 The GCC has seen a humongous growth with increased traction in accepting the latest technologies transforming the energy saving quotient. A commitment to reducing carbon footprints and electricity demand, will continue to push the GCC to soon become one of the fastest growing lighting markets in the world.

Over a period, LED has become a non-flickering choice both at the conventional and architectural applications due to its sustainable principal of saving energy and cost. Though LEDs were introduced into the market long time ago, its acceptance was poor due to its high cost. However, its product characteristics like – reliability, quality, versatility, life, and energy efficiency along with its reduced cost have helped LEDs dominate the lighting market lately. As the understanding of benefits from LEDs continue to increase in the demand community, the market for LEDs is expected to grow considerably over the next 10-15 years.

The LED lighting market is estimated at approximately USD 1.2 Bn of the overall USD 2.7 Bn lighting market, accounting for 44% penetration in the GCC with a YoY growth of 10 to 15 percent. The penetration is expected to go as high as 62 percent by the end of 2025. 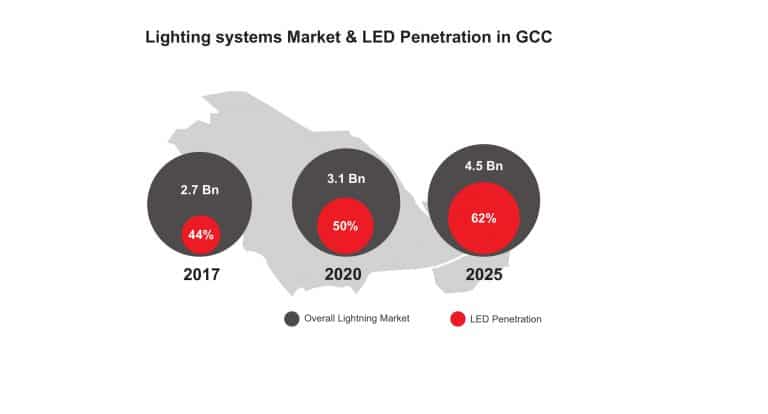 The penetration of LEDs differs by application and sectors as well whose trend is depicted in the figure below. While the acceptance of LED is growing, the market for conventional technologies still exists and, in few cases, cannot be replaced. 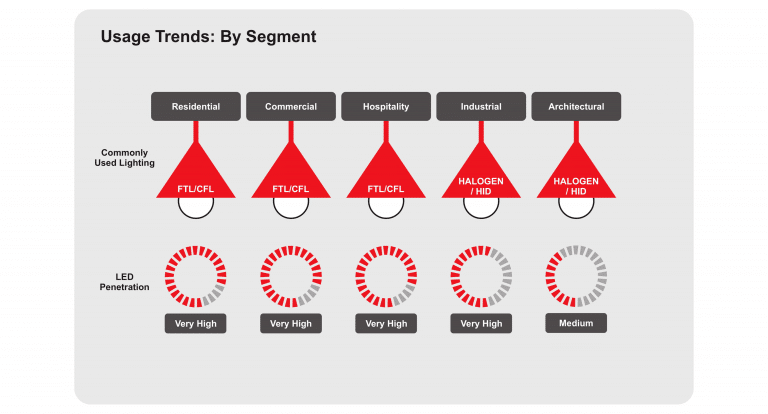 The LED lighting market is anticipated to witness a compound annual growth rate (CAGR) of approximately 12% between 2018 and 2025. The growth has been estimated to be much higher than the global rates pushing the GCC market to touch USD 2.8 Bn by 2025. The customers in the region are increasingly accepting this rapidly growing technology to contribute to the sustainable energy goals of the region. 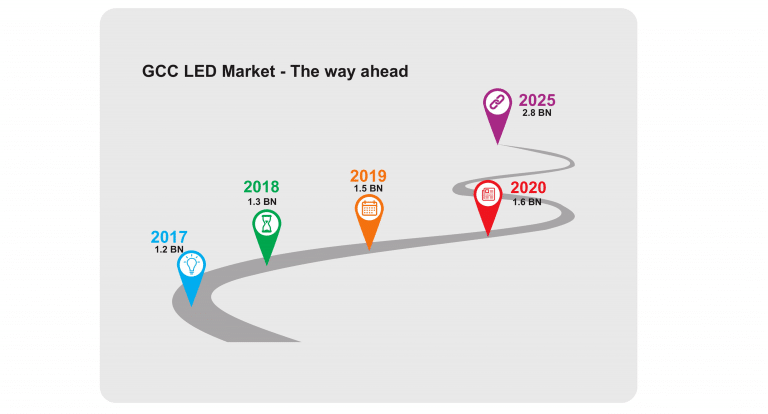 The LED market is expected to grow at a very fast pace specifically in the UAE, KSA and Qatar where investments in the construction sector are at its peak. It is evident that the GCC Lighting industry is at the peak of its transition phase from conventional to LEDs and other sophisticated solutions like Integrated Lighting Management Systems (ILMS), and Lighting as a Service (LAAS).

With the price now almost at par with other technologies, LED is undoubtedly becoming the new normal for Lighting across all segments and applications!!!