Vernacular is NOW, not the future – A $300 Bn Opportunity Today

Internet adoption started in India at the onset of the new millennium. Early adopters received low-speed internet (56 kbit/s) on dial-up modems. Desktop computers were the devices used to access the internet. The average rate of adoption was 8 Mn users per year. The story started to change as low cost 2G enabled phones started flooding the market and websites became mobile friendly. On an average, 36 Mn people per year got access to the internet.

Soon after, a seismic shift was witnessed on two fronts – in internet technology with the introduction of 3G and in internet-enabled devices with the introduction of affordable Android smartphones. The faster 3G speeds and the affordability of smartphones increased the adoption rate to 45 Mn users per year. But the biggest disruption was yet to come.

In Sept 2016, internet was essentially commoditized with the entry of Reliance Jio in the market. Data costs fell by 93% from pre-Jio rates.. A phenomenal 65 Mn users on an average adopted internet every year from 2016 onwards. With close to 530 Mn internet users, India has the world’s second largest internet user base, presenting a huge opportunity in terms of digital market size. 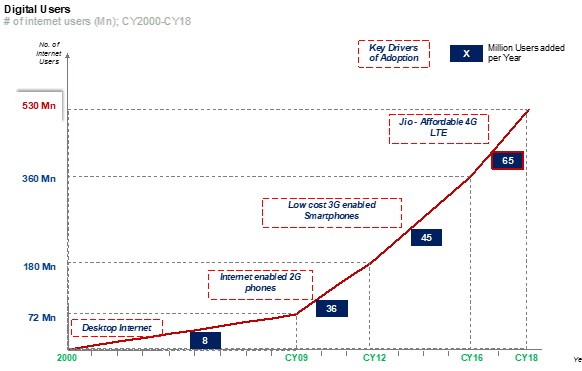 Owing to increased internet penetration and the advent of affordable internet-enabled smartphones which support various E-tailing applications, the growth in the number of online shoppers in Tier 2/3 cities and rural areas is expected to outpace that of urban areas. According to estimates, almost 70% of E-tailing GMV would come from Tier 2+ and rural areas by 2023, compared to 40% in 2018.

The rise in disposable income and increased penetration of smartphones and internet access in these areas is expected to be the primary growth driver for the advent of online shopping. User preferences are also expected to evolve, especially with the younger population in Tier 2+ cities, who are open to experimenting with the enhanced options that online shopping provides them. E-tailers are also trying to capture this growing market by improving last mile connectivity and offering deep discounts to onboard new users, with the expectation of converting a high proportion into repeat customers. 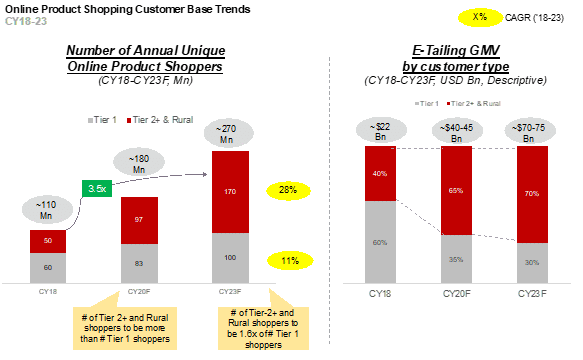 As internet becomes the most preferred medium, specifically with significant rise in vernacular users, digital ad spends on vernacular platforms will rise significantly 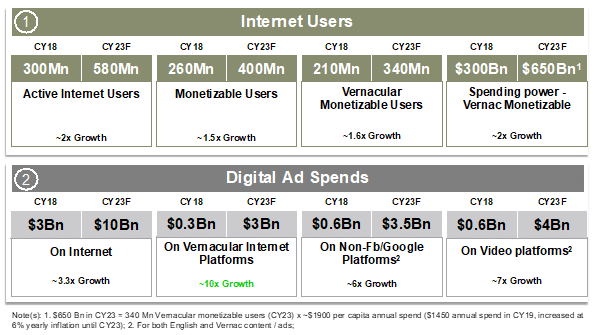 A Pan-India survey was conducted by Redseer, spread across demographics and internet usage patterns to determine the importance of the vernacular user in the present day digital space. This was one of the largest surveys designed to try and understand the impact of monetizable internet users. An important aspect of this wide-reaching survey was understanding the preferences and consumption patterns of English-first Vs. Vernacular-first users.