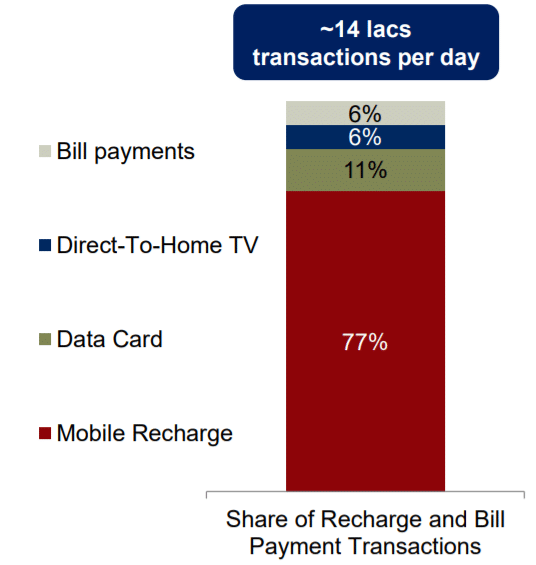 This document covers a perspective on the performance of Paytm along with the key initiatives taken by it and its focus areas.

7.7+ lacs on deck transactions daily (including travel and other verticals)

Short term wallet focus is on increasing the share of KYC customers; in the longer term, Paytm is also looking at deploying wallet for B2B transactions

Offline Merchants Strategy
Strategy Till The End of FY15 16
'In the last financial year, we were purely looking at gaining market share in the offline business and the management was not focusing on revenue part at all. Hence we were blindly looking to on board as many category B& C
merchants as possible as we believed that there is a huge potential for eliminating cash usage from these guys.'

'However, while we have succeeded in onboarding many such merchants, the average daily transaction count and value is quite small for them, leading to a very small GPV contribution. Thus the management is rethinking this strategy for next FY '
Forward Looking Strategy
'In the next financial year, we will be focusing on onboarding a lot more Category A merchants besides Category B and C ones'
'We are targeting a total offline merchant count of 1 lac by the end of FY16 17'
We expect more than 30 35% of total wallet 3P transactions to be generated from offline merchants by the end of FY16 17, up from ~7% now'

o As a part of this deal, FIS will provide payment processing and banking
solutions including software, services and technology to Paytm

Investment of INR 1,200 Cr is planned for the first three years. Paytm is looking to set up 20 large branches, 200 smaller branches, and take on at least 1,000 agents in this period

One of the planned offerings is a cardless credit card backed by a bank, which could be connected to a customer’s Paytm wallet. This could be further used for transacting with Paytm's large online and offline merchant network