How Consumers in MENA are planning their CPG shopping this Ramadan 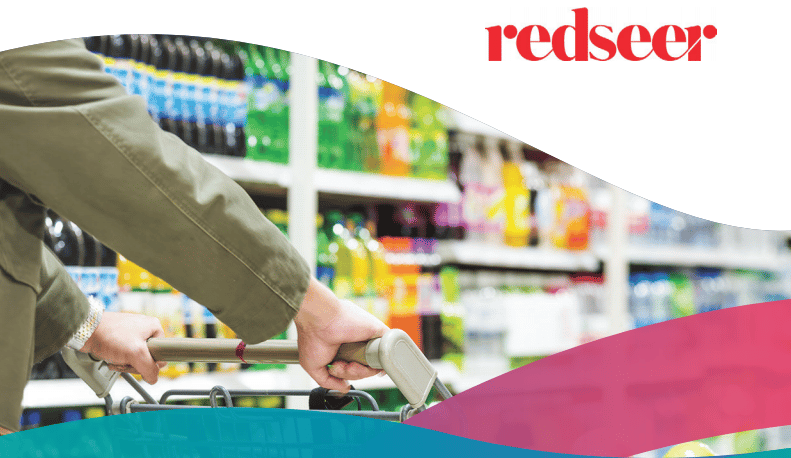 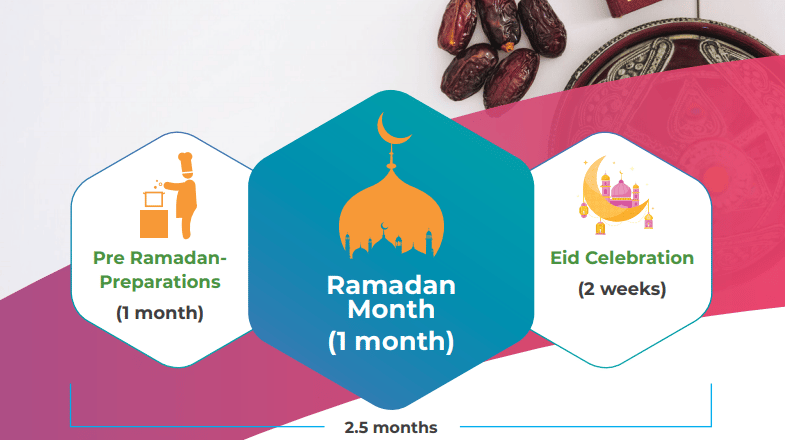 Ramadan is the longest global festival where 1.9Bn people observe Ramadan & Eid annually translating to a quarter of the world population. The festival is highly popular in the MENA region (Middle East and North Africa Region) where 95% of its population fast in the holy month (463 Mn). In other parts of the world – 24% of APAC (1,057 Mn), 7% of Europe (50 Mn), 1% of North America (5 Mn) and 19% of rest of the world (331 Mn) celebrate the holy festival of Ramadan. 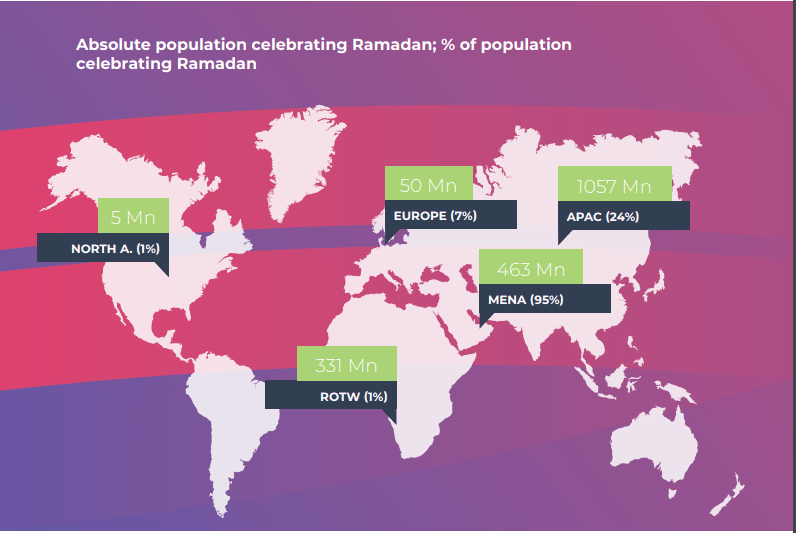 With ~75 days of celebration, huge shift in consumer consumption behaviour is seen during the festival. While most of the consumers might fast the whole day spending time in spiritual reflection, families and friends often come together for Iftar, breaking the fast at dusk. The build up to Iftar is is marked by women cooking traditional meals at home, which augments the demand for certain food and beverage categories.

On the trade front, marketers respond to increased consumption habits with a range of Ramadancentric marketing communications. As meet and greet happens in this festival all along, categories such as Media & Entertainment, Beauty and Personal care, Fashion, Footwear, Furniture and home essentials, Telecom, Travel, Automotive and Tech also see a surge in the demand. People also start engaging in planning activity for this shopping much in advance.

Overall, Ramadan plays a key role in defining the economy of the region. Since the festival is celebrated by 95% of the population, some countries have laws that amend work schedules during Ramadan. Like, under UAE labour law, the maximum working hours are to be six hours per day and 36 hours per week. Qatar, Oman, Bahrain and Kuwait have similar laws, giving them more time with family and community. 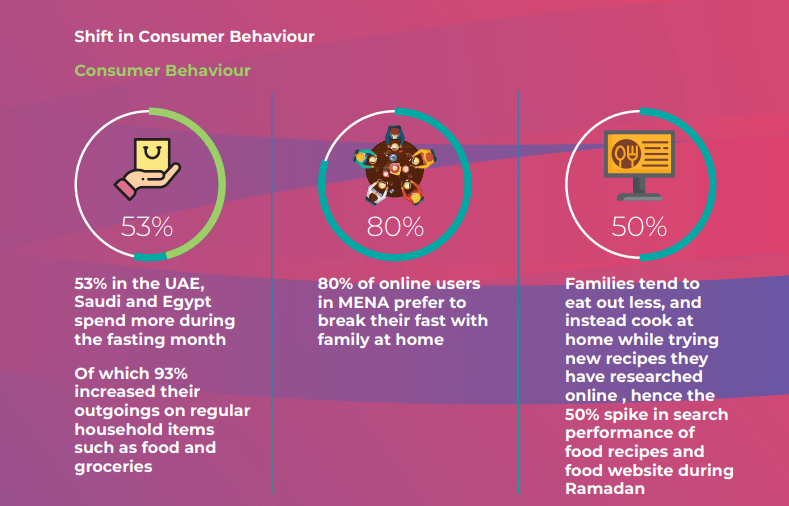 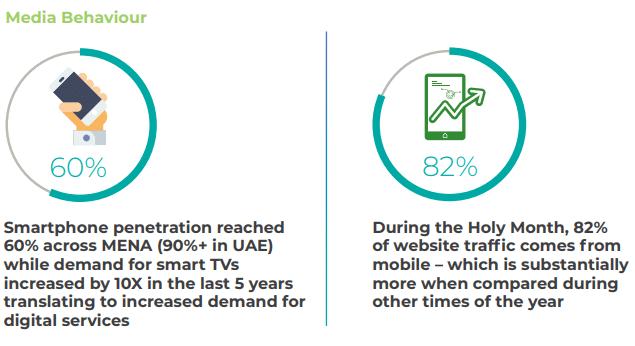 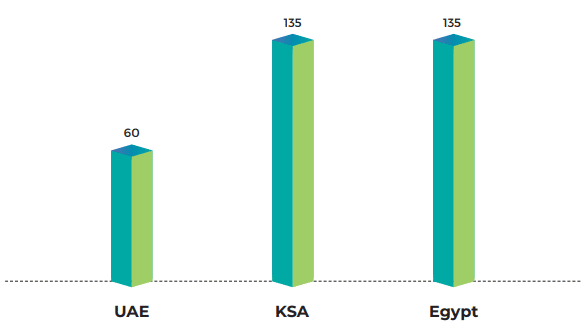 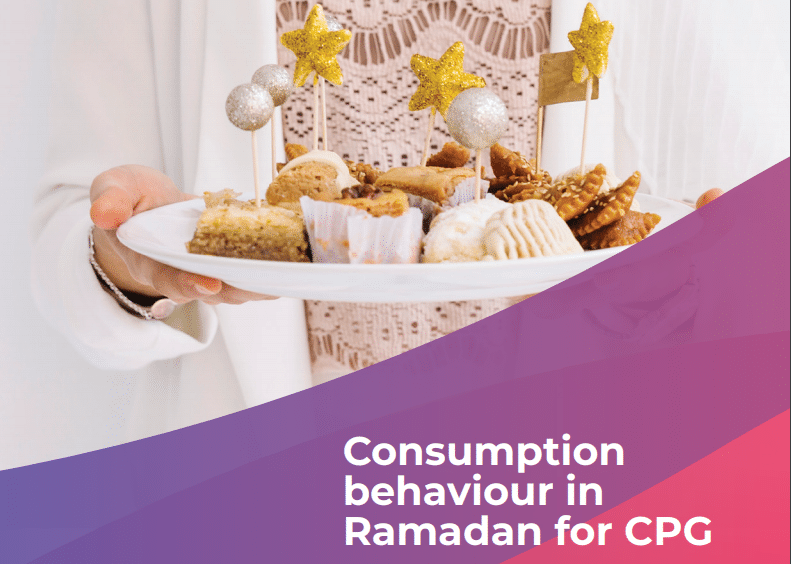 Consumption behaviour in Ramadan for CPG 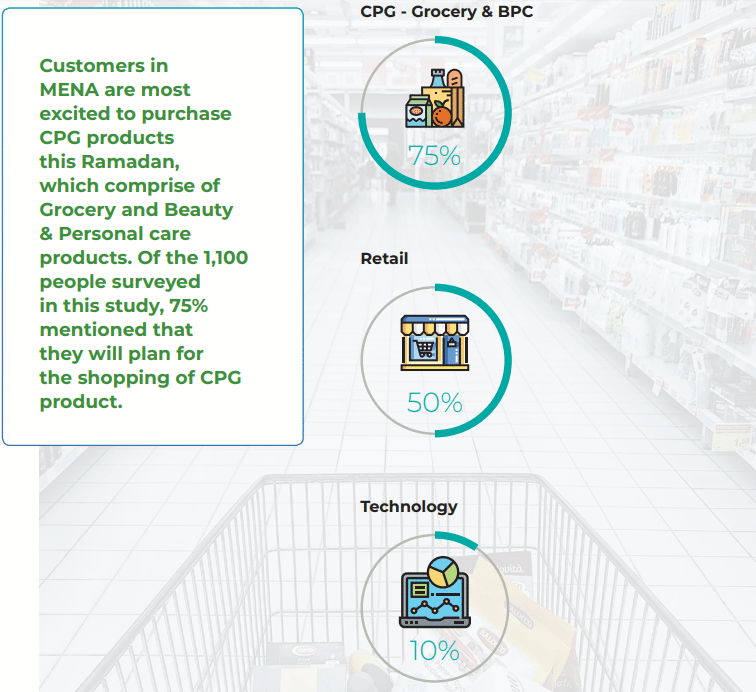 The excitement level among different age groups and genders in the three countries is similar, where 90%+ people purchasing CPG product mentioned there will be increase in grocery. shopping. However, when this trend was analysed over the three phases of Ramadan – Month before Ramadan, Ramadan month and Eid week; significant differences were observed. Please note Grocery comprise of both Edible products such as – Fresh, Meat, Staples, Bakery, and, Beverages and non-edible products such as home essentials and home care. 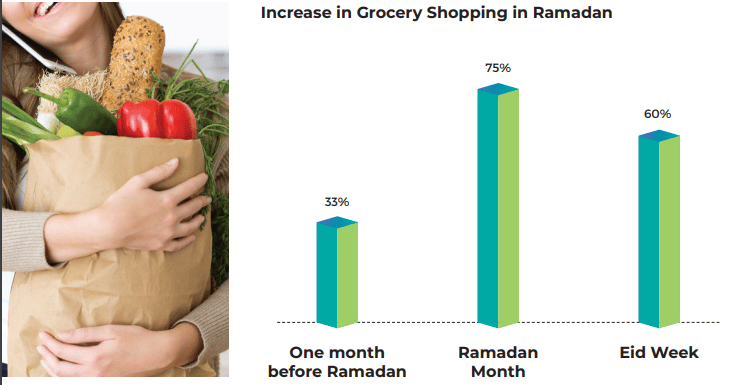 One Month Before Ramadan

33% people mentioned there will be increase in grocery shopping in this period. This will also be coupled with taking advantage of preseason offers and stock for future.

The excitement levels among the people in Egypt was found to be highest where ~50% of the consumers mentioned that there will be increase in grocery shopping in this period. While in other consumer segments this behaviour was consistent. 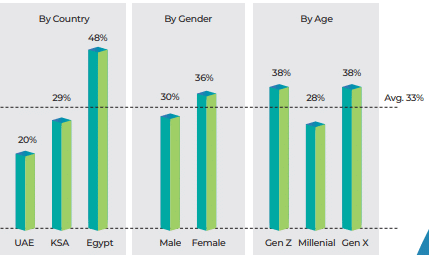 The month of Ramadan is when 75% of people believe there will be increase in the grocery shopping. Ramadan not just brings a consumption spike but also a shift in eating habit to celebrate the fasting.

The excitement levels in Egypt to purchase grocery was again found to be highest while other consumer verticals were observed to be behaving in coherence. 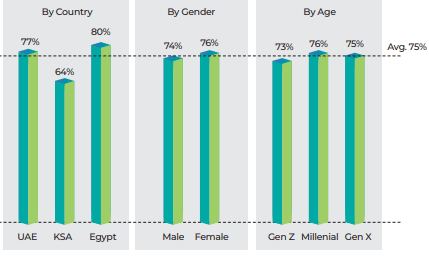 Post the month of fasting, the world celebrates Eid which brings families and communities together to feast. This requires high volume purchase of groceries. ~60% of people say that there will be increase in grocery shopping in this period. 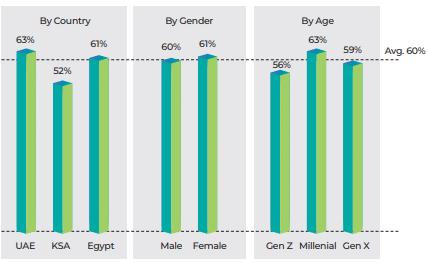 The excitement level to purchase BPC (Beauty and Personal Care) products among consumers in UAE and KSA was observed to be higher when compared with consumers in Egypt. Overall 40% of the consumers planning CPG products mentioned that there will be increase in BPC product shopping in the festive season of Ramadan. The trends among different age groups and gender for BPC shopping get detailed below. 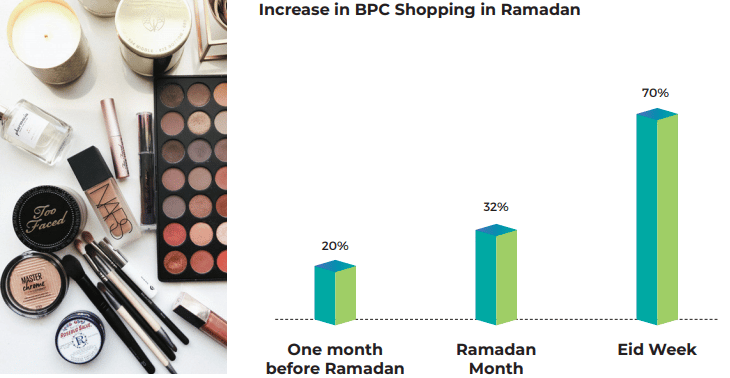 One Month Before Ramadan

Excitement level to purchase BPC products is low a month before Ramadan with ~20% of people saying that there will be increase in the BPC product shopping. Since celebration days are yet far and comparatively lower level of planning required, the excitement levels are low during this period.

Of all the three countries, highest number of people in Egypt mentioned that there will be increase in BPC shopping one month advance of Ramadan 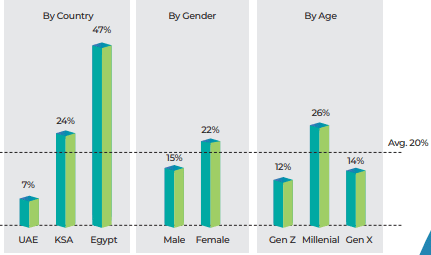 32% people in MENA region mentioned there be an increase in the purchase of beauty products during the holy month of Ramadan. Meet and greet starts increasing during these months up till Eid, thus increasing the traction on beauty and personal care products.

A significant jump is observed in UAE and KSA compared to a month before however for Egypt this share drops. The behaviour remains comparable among different age group and, gender. 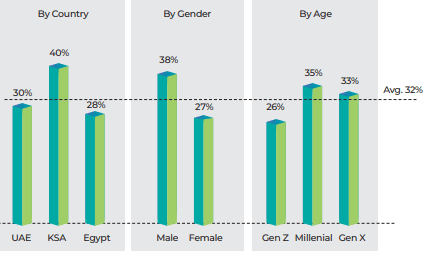 As Eid approaches, the week before and after Eid is the time of increased community interactions. Therefore, grooming products like perfume, makeup, body care are high on demand. 69% of people in the MENA region mentioned there would be an increase in the BPC product shopping during this time.

This increase is highest in UAE at 84%. The behaviour remains comparable among different age groups and gender 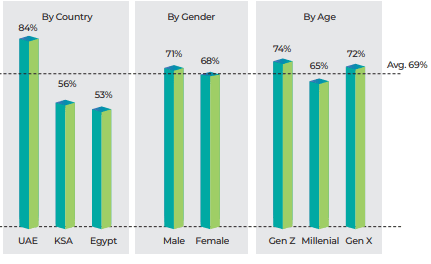 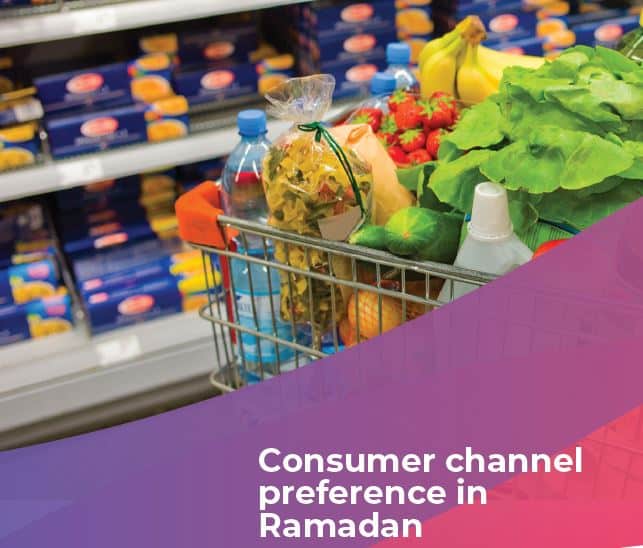 Offline is the most preferred channel for shopping CPG products in Ramadan in MENA; however, there is increasing trend in acceptance of online channel and omnichannel among the consumers in KSA and UAE

The retail network in the three countries is evolved and consumers are used to shop from the offline channel. However, the emergence of e-tail and great support from the private equity funds have helped the sector establish in the region. Currently the e-tail market in MENA stands at USD 8 Bn which is expected to reach USD 25 Bn by 2022, at a growth rate (CAGR) of 30%+.

The e-tail firms in the region started with a horizontal journey where they were offering products across sectors with a focus on electronics. This was followed by verticalization (i,e. focus only in one sector), with fashion being the preferred sector as it offers the best margin. Currently BPC outperforms any other sub sector of fashion with the highest online penetration.

E-tailers have slowly realized that grocery is the segment which involves highest frequency of shopping and if even a marginal share of it could be brought online, it would translate to huge volume. Hence, slowly the sector started gaining traction. Currently online grocery is the fastest growing online sector with 65% of year-on-year growth rate. 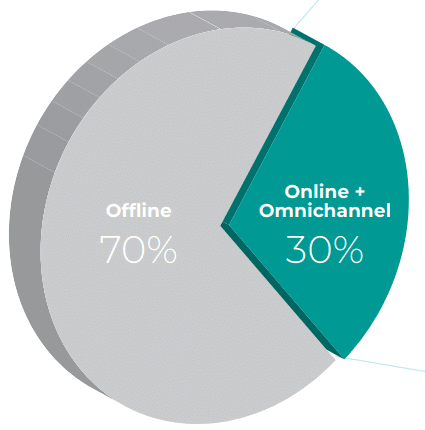 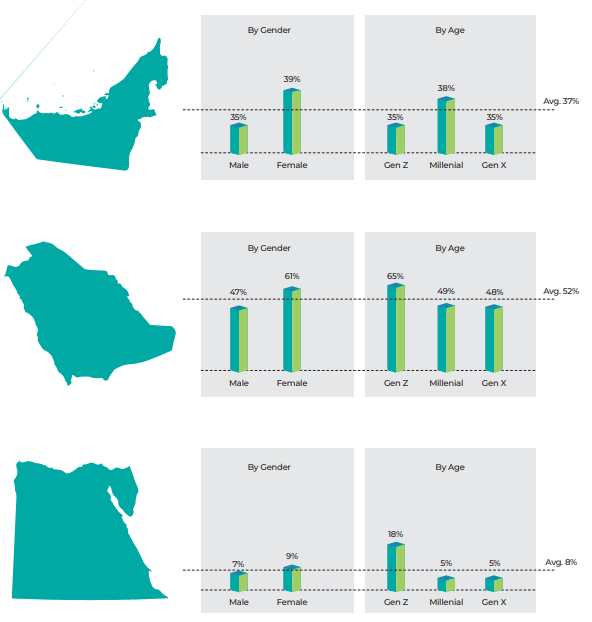 When asked, consumers communicated a high acceptance among people to purchase CPG product from online and omnichannel networks, especially in KSA where the acceptance levels are highest 50%+, followed by UAE at 37% while people in Egypt still prefer offline channel for CPG shopping.

Even suppliers are understanding this trend and increasingly making efforts to promote online channels for CPG in KSA. Carrefour partnered with Wadi grocery and invested USD 30 mn last year. Nana direct another big player in KSA received USD 6mn of funding early this year. There has been innovation in online grocery models where bulk buying is a picking up trend. Panda retail the biggest offline player in the region is also keeping a close track on online sector and can be expected to enter by setting up a new firm or acquiring an existing player.

When online preference behaviour was studied for smaller cohorts, it was observed that females are more open to try online channel this Ramadan for shopping CPG products, while among different age groups, the youngest (Generation Z) have the highest acceptance to online channels.

The reason for popularity of online channel and omnichannel among consumers is the deals and discounts offered by the players. This benefit coupled with home delivery option fulfils the convenience people seek for during the festival time.

Reasons for preferring online channel and omnichannel for CPG shopping 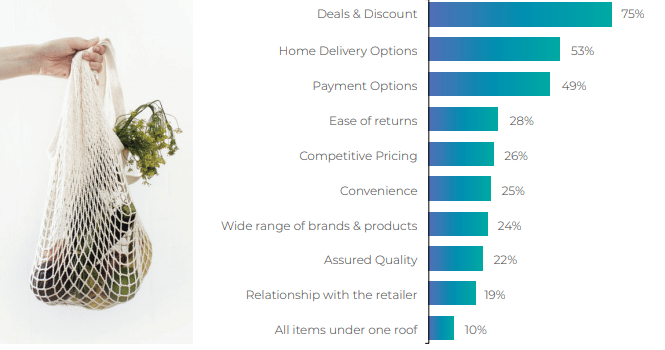 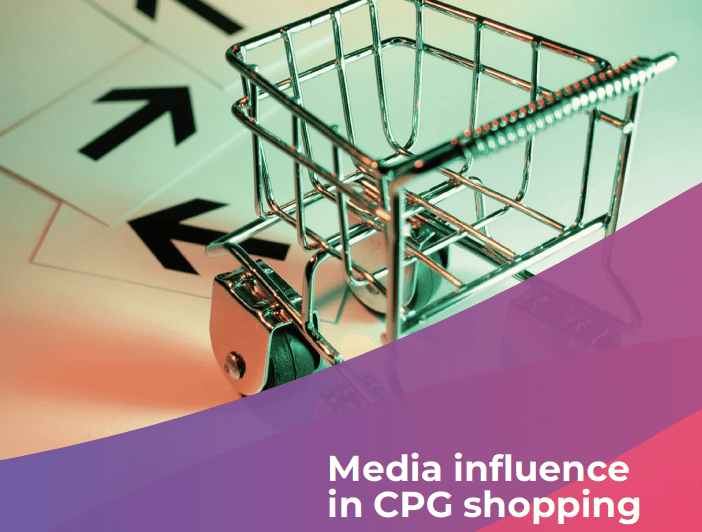 Social media is rated as highest by people across MENA as the most influential channel in helping with CPG shopping. Within social media, Facebook, YouTube and Instagram were rated highest

Across the Arab world, Ramadan is treated as a time to reconnect with one's faith and spend time with family and friends, which generally entails working less and resting more. This combination of free time and a celebratory atmosphere in turn means that time spent online is higher during Ramadan than any other period.

When the people in MENA were asked to identify the media channel which influence their CPG shopping most, social media was ranked as highest. This was followed by Product reviews and internet blogs and TV

'Media influence in CPG shopping among MENA customers in Ramadan' 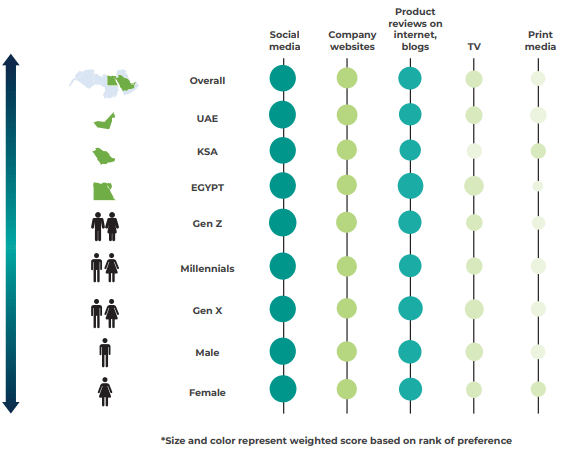 People search for new recipes and innovative ways to cook when it comes to looking for information regarding CPG on social media channels. Also, people are increasingly using social media channels to display their work. Local and international chefs and artisans see a surge in their followers during this holy month, who inspire people to cook something new and different.

With new dishes in kitchen, search for ingredients come into picture where brands and retailers have a strong play to attract customers by offering quick delivery, bundled offers, discounts, and cooking recipes. 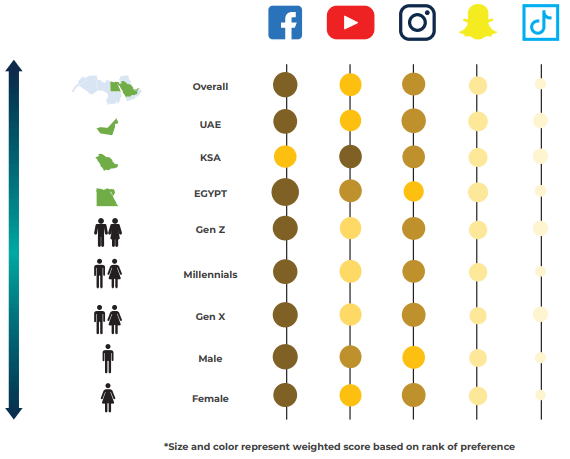 There exists an opportunity for CPG brands to take a customized strategy for different product categories in different MENA countries to create the maximum buzz among its target groups.